I was involved in a car accident yesterday.  Iris and I have no injuries (Thank the Lord!) and the driver of the other car appeared to be unhurt but his passenger did go to the hospital with the paramedics.  I was fully stopped at a red light (in fact, I had arrived at the red light just as it had turned from yellow so I was there for the full cycle) and when it turned green I pulled out to make a left-hand turn to go and collect B3 from preschool.  The other driver chose to not stop at the red light he had and so hit us going fairly fast.  I am completely guessing how fast he was going but the road he was driving on is 35mph and I would wager he was going at least 30.  He did swerve away from us at the very last moment and I believe his last second swerve is why we escaped the accident without injury because it allowed the front corner of the car to bear the full force of the impact.  When he got out of the car he immediately began to wave his arms about and was yelling at me for running a red light.  In the moment, I was upset and his yelling caused me to doubt myself which, in turn, caused me to apologize to him!  In retrospect, I am really mad at myself for letting him cause me to doubt my actions.  I am not saying I am a perfect driver or that I have never in my life run a red light.  I am saying, though, that I could not have "run a red light" that I had been stopped at for a full cycle and I also would not have run a red light with my child (or children) in the car.  Again, thank the Lord that Iris was unhurt!  In any case, the car who was at the light behind me stepped up and insisted I take his information so he could speak with the police because he saw the other driver crash into us and he knows I did not run a red light because I was actually sitting at the green without moving long enough that he was a second away from beeping his horn to get me to move.  When the police arrived, we called that kind, honest witness and he came from his house to speak directly with the officer to tell him what he saw.  Thank the Lord for good people!  Right now, we do not know if the police determined fault.  If the police claim fault is undetermined I think we will both be cited for a moving traffic violation.  I am praying the other driver is rightfully declared at fault but as the police officer told us - right now, it's going to come down to a fight between the insurance companies and we have to hope it comes down in our favor.  (SIGH)  Here is what our car looks like right now: 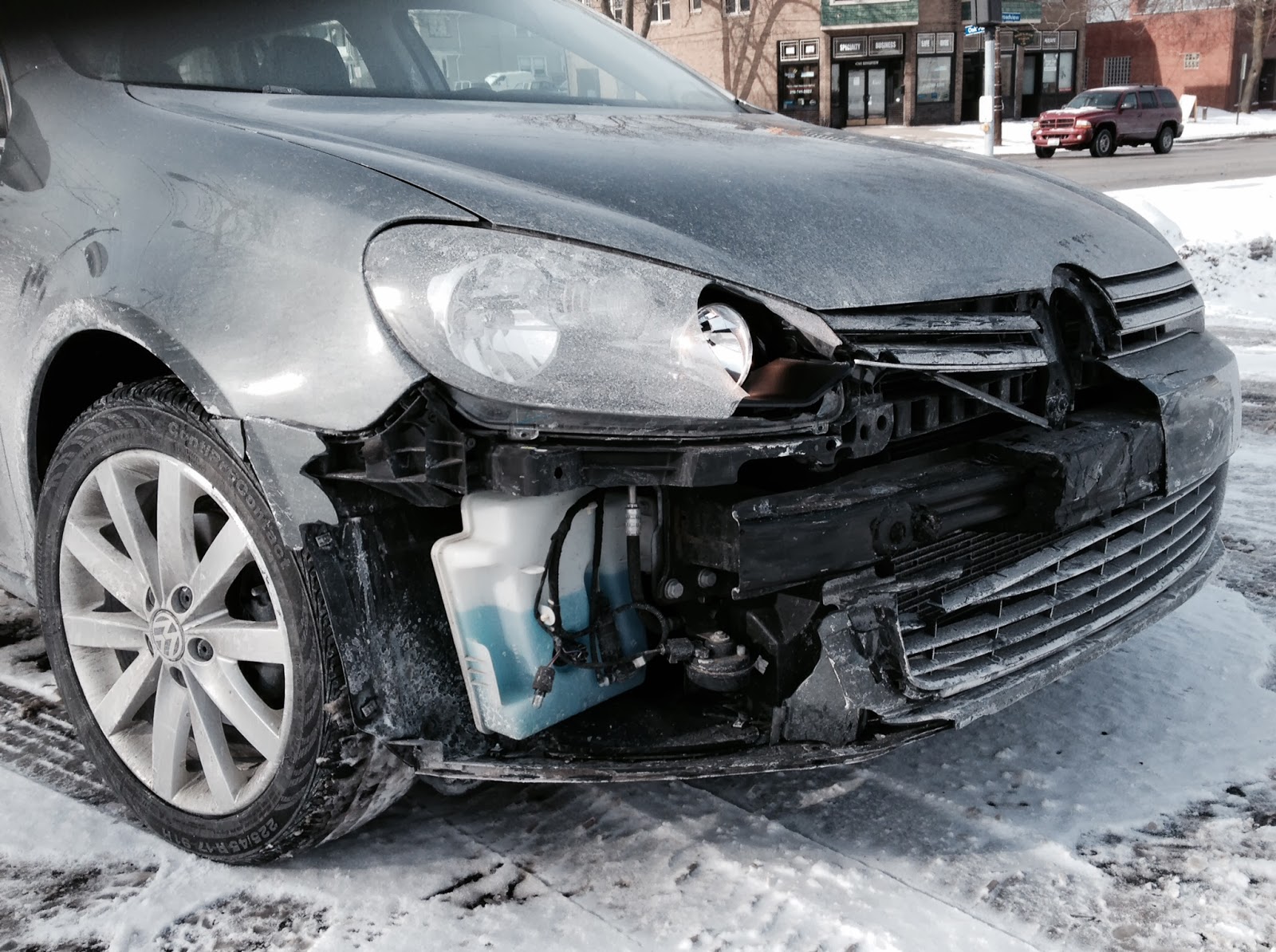 ** Update 1/28/14** It turns out I do have a small injury - my shoulder muscles are "strained" from when the seat belt locked me into place when our cars collided and I did have to go to the doctor and am currently on a prescription anti-inflammatory.  (side note: the literature that came with the prescription is kind-of scary with all the side effects and don't do this & that ... I hope I am not on it for very long!).  Also, the driver of the other car has a history of car accidents and has been investigated, but never prosecuted, for insurance fraud relating to several of this car accidents.  Of course, I am not a born cynic like Book and I kept trying to give the driver a break.  But, now, Book is proven right again - he's a better judge of who not to trust in this world than I am.  So, that's where we stand.  It really is going to be a battle of the insurances and we're waiting for the adjuster to let us know what needs to be done to our car so we can get it fixed.
Posted by Urban Cowgirl at 2:54 PM